A MESSAGE from CHRISTIANE TAUBIRA 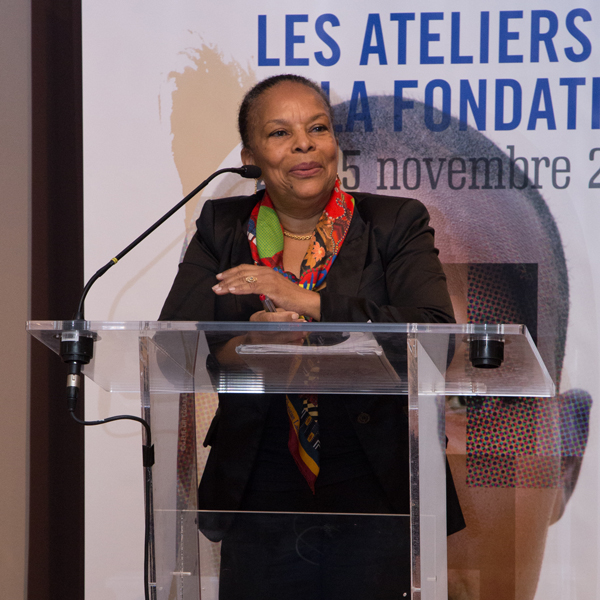 Excerpts from the closing speech at the Foundation Workshops, 25 November, 2018.

"I had intended to stand before you and deliver a speech – speech, oh I don't like the word speech – to bring these workshops to a close by addressing you in a solemn tone. Because the subject calls for solemnity, it commands us to settle down, and sometimes to lower our voices to make ourselves heard. And then, ever since I got here this morning, there has been so much life, so much energy, so much impatience, such a sense of urgency, that I decided to exchange what I had solemnly constructed in my head and to talk to you about that instead. This is what my notebook page has become from listening to you since this morning, and I believe that this page bears witness to what has emerged from the audience today: different approaches that intersect, that double back; reminiscences, recurrences, an insistence on being heard, so that aspects that we hold dear and that have not yet received a response be heard, be uttered. So rather than that solemn voice, here is mine; it is rising among yours, it is trying to take its place among yours, it does not overshadow your voices.”

"To begin with – and this may be a pleasant surprise – I overheard ‘our Foundation.’ I believe that taking ownership is essential. Our Foundation: moment by moment, those who will keep this foundation alive must be aware that it belongs to you, that it belongs to us, and that this foundation will have meaning if it inhabits what Césaire again called ‘our furious us’: "Wind wrap me up until the furious us.’ (...) So this ownership seems to me to be an excellent omen, and a promise that we will be inside, outside, below and above, but with unfailing vigilance.
“Next, I would like to urge you to be able to recognize victories and to bask in them. When we achieve a victory, let us acknowledge it, let us proclaim it. Firstly, because it feels good, and secondly because each victory enables us to brace ourselves to demand others, and to fight the battles that lie ahead.”

"In the years following the passage of the 2001 Act, there has been compliance with Article 2 on the requirement to teach this history at all levels. (...) This was a victory, let's remember it, proclaim it, and demand that it go on.”

"Yes, there is considerable courage in saying that all these people were victims, but not victims, full stop! Victims of a government system, victims of a coalition of monarchical powers who used all their knowledge, all their means, all their techniques of the time, all their diplomatic relations, all their ambitions, and all their interests to crush people in individuality, not armies against them, but people in individuality and people caught by treachery, people deliberately destroyed, including for the sake of example. (...) Yes, you may disdain the humanity that we carry within us, but it is we who will save you, because by resisting, because by showing that this humanity is invincible and indestructible, we will save you from your inhumanity.”

"So yes, our ancestors were victims; let us honour them, let us bow our heads; but yes, our ancestors were also those who seeded the contemporary world. The contemporary world! I am talking about the world. I am talking about all human societies, European societies, American societies, southern and northern societies, Caribbean societies, African societies, Asian societies too, because in this great maelstrom, you know that Asia was taken by the drafted, the coolies; and it is in our countries, in our societies, in our lands, that is found the nectar of everything that the women and men of the world have invented, created – be it languages, be it syncretic religions, be it gastronomy, be it dances, be it songs, be it explanations of the universe, be it knowledge of plants, be it methods of healing, be it techniques for fishing, hunting or farming. It is there, in those encounters of languages, vocabularies, structures, in those encounters of beliefs, in these encounters of "How do we eat? What do we like to eat? What do we add to the pleasure of the palate?” Ah, the delights of the sense of smell... that's where it was all invented, it's in those places. What could be more human than that? Is it possible to be more human than that? There are our victories! They are immortal, they are eternal.”

THE WHOLE WORLD VIBRATES IN US

"Yes we are plural, and that is our power. The whole world vibrates within us, and we are connected by the frequency of memory and history to the world in its entirety. And that is the greatest strength of French society. And if it is aware of that – and it is one of our missions to make it aware of that – the strength that this monstrous history brings to it, that strength can also make it invincible, and help it get rid of its completely irrational, deadly fears, the fear of the other, the fear of the different.”

"For my part, I want any and every child of this country, wherever in this country they are born, whatever their appearance, whatever their colour, and even whatever their family’s social status, I want that child to have every chance; all their chances, and if in twenty years' time they are meant to be a Nobel Prize winner in literature, a Nobel Prize winner in physics, a Nobel Prize winner in chemistry, I don’t want anything to have stopped them, no systemic mechanism that discriminates and that could have stopped them at any point in their journey. That’s what I want, meaning that I want the integration mechanisms in public services, and particularly in education, to become blind, that is what I demand! Not to be seen for my colour, but for my colour not to be seen; for my intelligence, my will, my talents, and my character too, be seen!”

"(...) an extremely important point: reparations were discussed this morning as well. The crime is irreparable, and let us say it loud and clear: The crime is irreparable. No nuances, no approximations, no buts, no ifs: the crime is ir-re-pa-ra-ble, full stop. (...) Reparations are a subject, and I think that the Foundation must manage to exhaust it, at least conceptually. I believe that reparation is impossible, but I will not tolerate the idea that there is no subject to consider. There are things that are possible, there are public policies – the land policy I just mentioned, because the economic subject is often completely ignored; we talk about finances, we talk about all sorts of things, sometimes just as virtual things, but we don't talk about the economy. Yes, the economy is part of the theft, and yes, the economy is part of the possibilities for reparations.”